I was a little daunted my the time it might take to bake and construct my first gingerbread house, so decided to try this out in the Christmas break, when I'd be able to give it full attention. Rather than plan it myself, I put it on my wish list, asking not for a pre-baked kit, but a recipe and decorations so I could work from scratch. My family were kind to me, and on Christmas day I received print outs of the BBC GoodFood Simple Gingerbread House, pre-cut templates, a baseboard, and a tub of all the sweets needed for decoration. What I didn't get included on the print out was the many helpful comments from other home bakers that have tried this recipe. These I only found after completing my house. 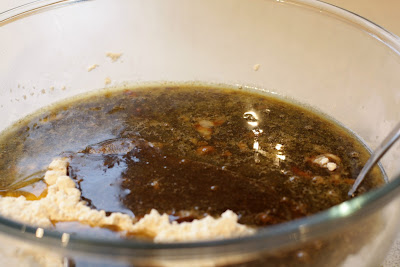 I didn't bother pre-heating the oven, as I often find it gets up to temperature long before I'm ready, particularly with a new recipe. I melted the butter and sugar and golden syrup together and added them to the sifted dry ingredients. 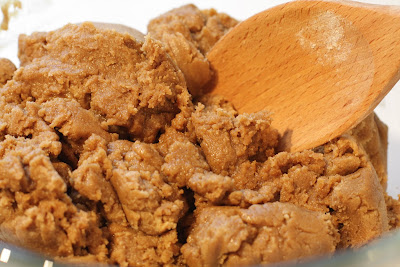 Stirring the mix together with a wooden spoon I quickly made a smooth dough without any need to add water. I did then realise that the melted butter meant this dough was far too warm to roll out. After leaving it to cool a little I popped it in the fridge for an hour whilst I had lunch. 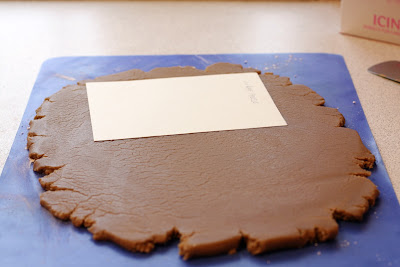 Rather than rolling out on baking paper I chose to try my silicone baking mats that seemed to work fine. I used icing (confectioners) sugar to help stop the rolling pin sticking and cut out the shapes with a palette knife. I was a little concerned at a cracking texture that developed as the dough thinned, but I needn't have worried as it all smooths in the bake. 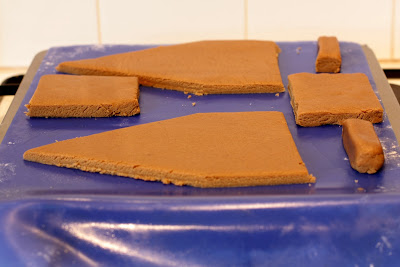 As I was making progress I now pre-heated the oven. In total I prepared three baking sheets. As mentioned by other bakers, there did seem to be a large excess of dough. I made some extra struts to brace the walls, then found an appropriately sized gingerbread boy cutter and made 8. I baked the trays one after the other rather than have issues with having different heats on different shelves. All the shapes spread a little during baking so most required trimming. I did this on a chopping board with a bread knife. This was best done as the recipe suggests, before the biscuits completely cool. Like other bakers, I had issues trimming around the almonds on the roof pieces, which were fiddly to insert in the first place. If I was doing this again I might have used chocolate buttons to make the roof tiles. 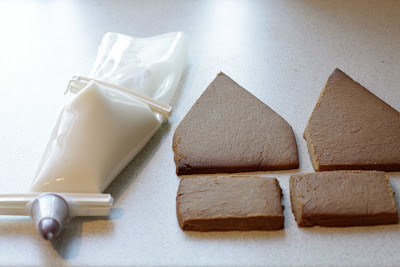 Day 2, and time to start construction. Mixing the icing, I was impressed by how tough it was, initially using a spatula to stir, but soon resorting to a metal spoon and fair bit of effort to get a smooth paste. I'm still pretty novice with a piping bag, though have previously invested in this silicone piping set from Lakeland. I find it easy to load, and clean. I use bag clips to keep things in place. 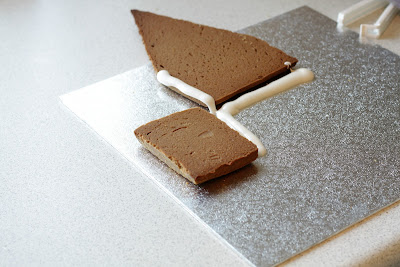 Not sure how to begin, I piped some foundations and made a two wall sandwich. This worked, so I pressed on. I did insert a couple of the extra struts I'd made into the inside corners of the house, but I was beginning to realise that this was quickly becoming anything but delicate. 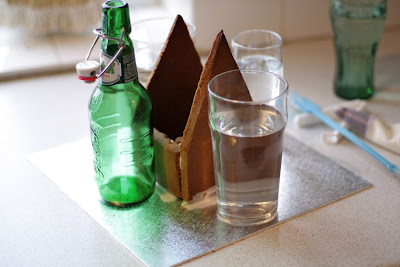 It soon became clear I'd need some supports. The recipe suggests a small bowl inside, but I found water filled glasses and a beer bottle more effective. The shaped glasses were particularly good, as the propped up the gingerbread without the narrower base getting stuck in the icing. I left this for few hours to set. I was worried what would become of my icing bag. I tipped it back to clear the nozzle and reattached the food clip. 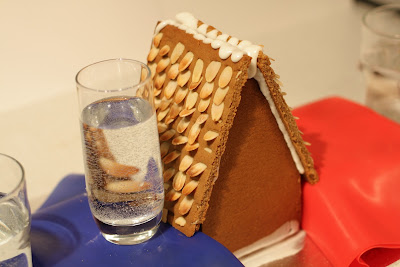 In the evening I built the roof. I found a stack of 5 CD cases to be the right height. I loosely wrapped them in the silicone mats and used my glasses of water to support it all. There was a gap at the roof top, which I covered with a zig-zag of icing, and left overnight to dry. 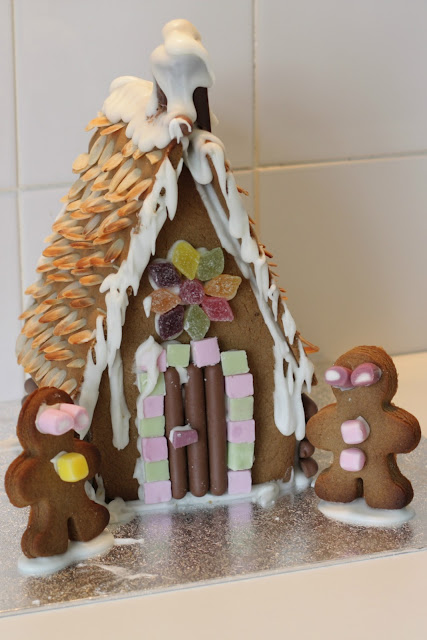 Day 3 - Decoration. I may have spent less time on this than I should have. I struggled to make the icicles and made a fair bit of mess sticking on the sweets. I came to the conclusion that I underestimated the sheer strength of the adhesive properties of the icing. A finer nozzle on the piping bag would have given me a prettier finish.

I'm not sure about my bug-eye gingerbread zombies. They are a bit scary.

I thoroughly enjoyed this challenge, and the gingerbread is delicious, though I had not anticipated to spend quite so long.

If you want to tackle your own masterpiece I recommend viewing Gingerbread Source for inspiration.

Posted by Gingerbread Boy at 14:51