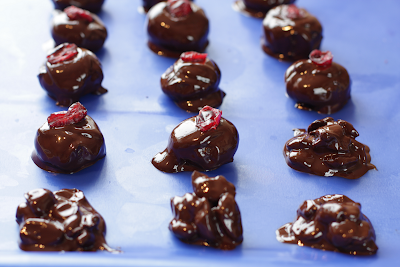 After my haphazard attempt at panellets, I was left with just short of a kilo of marzipan to put to use. Not being well, this had been left wrapped tightly in clingfilm in the bottom of the fridge for a month. In my childhood my family would make marzipan sweets, coloured and shaped to resemble fruits. Occasionally some marzipan was left over, and we'd coat it in chocolate. This chocolate covered marzipan stayed moist, whereas the fruits would dry out. I decided I would make chocolate coated marzipans, three ways for my family Christmas. 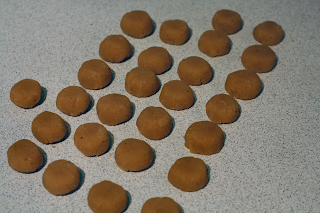 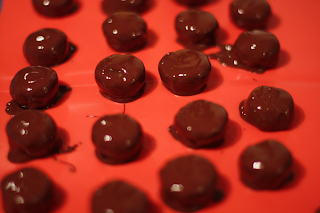 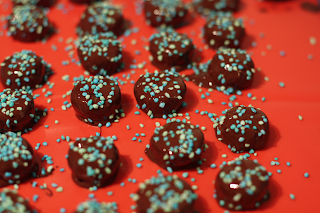 Unwrapping the first 300g block of marzipan, I was cautious as to whether it had gone off. Fortunately it did not smell at all bad, and had become quite dry and very hard to work. This lack of moisture was important to it staying fresh.

I continued to put the full force of my weight into kneeding the crumbling block of paste. After a few minutes of working the almonds released their natural oils and I was able to roll some conker sized balls. As an afterthought I flattened these to prevent them rolling about.

I prepared a tray with a silicone mat. You could use greaseproof paper, but I prefer these.

In a medium glass bowl over a small pan of simmering water I melted 200g of Tesco Finest Swiss Plain Chocolate with Mint. When it was runny and glossy I simply rolled a sweet in the chocolate and lifted it to the tray using two teaspoons.

Looking in my store cupboard I found Dr. Oetker Sugar Crunch, which I'd bought without a specific use in mind. I knew this would easily identify my minty sweets and add a little crunch so liberally scattered over the tray.

With this batch finished I transferred to the fridge to harden. 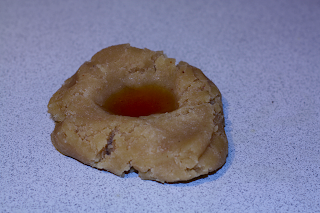 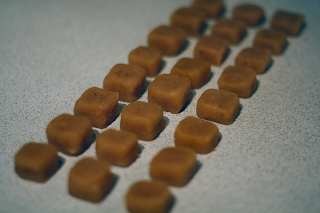 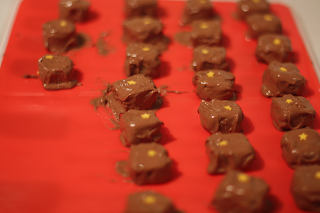 To be honest with you. It was another day that I came to make the second batch. After working the second lump of marzipan a little to soften, I made a shallow well and poured in about a shot of Three Barrels VSOP French Brandy.

I then just folded it in on itself and worked it more until any spillage was soaked into the paste. This made it much easier to handle.

For a different shape I rolled the ball into a sausage. Where the sausage broke, and it will, I just rolled each piece in turn until it was again the thickness of a conker.

Next I pressed gently to square-off the sausage, and then with a sharp knife cut 1cm slices. It doesn't matter if they aren't identical. It lends to the handmade charm and everyone likes to find the oversized 'bonus' sweet.

I used 200g of Cadbury Dairy Milk Chocolate. I could not get the same gloss that I achieved with the dark chocolate, and I also found it harder to work with. It seems milk chocolate is more prone to overheating than plain. I should have removed the bowl from the simmering pan once the chocolate had melted. Another lesson learned.

To decorate my brandy sweets I placed a single yellow sugar star on each. These I'd got from Asda as a 'sprinkles' selection. 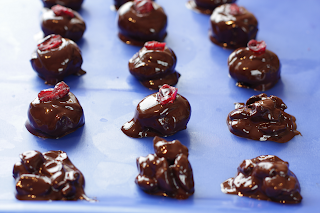 For the third and final batch I allowed my marzipan to absorb 2-3 shots of Disaronno Originale. I formed these sweets into rounds and coated them in Tesco Finest Swiss Plain Chocolate. I topped these with a dried cranberry 'hat'. Festive.

No chocolate was wasted. Any left over from the marzipan was used to coat walnut pieces and raisins; anything for a little surprise.

I can tell you that all of the sweets were enjoyed over the holidays. The marzipan enriched by the fruity Disaronno was by far the best sweet. It went so well with the cranberry and the bitter dark chocolate.
Delicious.