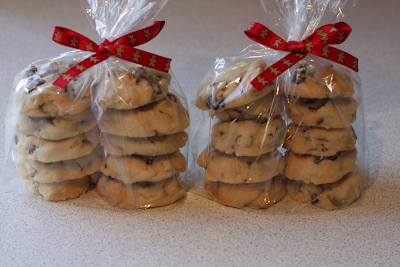 The week before Christmas is a busy time for most people. I was particularly busy in the kitchen baking lots of treats as gifts. This "make ahead" recipe was brilliant as I prepared the dough a month in advance, meaning that it was very quick to finish the bake one morning.

The recipe used was another from November 2011 BBC GoodFood Magazine available here. 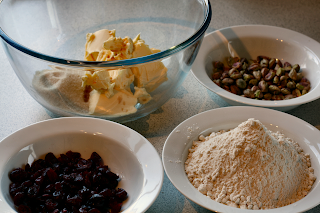 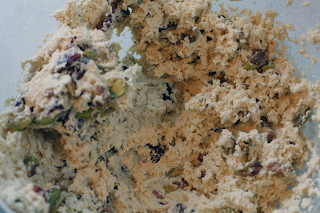 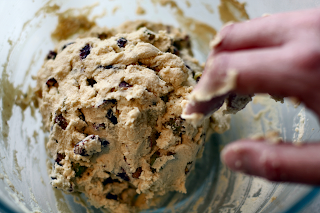 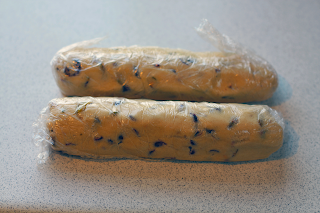 In a large mixing bowl I added 175g of Flora Buttery (rather than softened butter), 85g of golden caster sugar, and ½ tsp of vanilla extract.

I creamed these together with an electric hand mixer. I'm sure it is possible to use a wooden spoon, but I'm lazy and this seemed easier.

I added 225g plain flour and cautiously lowered the hand mixer straight down into the bowl on a low speed. No cloud of flour generated. The mixture came together.

I added 75g pistachios. If like me you buy these in these in their shells, and do the hard work yourself, then you'll need to buy about 300g. Them shells are heavy packing.

In went 75g dried cranberries. The hand mixer met my final ask of it to distribute the fruit and nuts evenly through the dough. I used the lowest speed and when the whisks got a little clogged,  just lift them out a little so the mixture spins free.

To bring the dough together it was time to get my hands dirty. There's a photo to prove it.

I brought the dough to form a ball. Using a plastic spatula I cut the dough ball into halves.I cut two lengths of clingfilm and on them shaped the dough into two 5cm thick logs.

These need to go in the fridge to chill for an hour, but I kept them in the freezer for a month. (They keep for 3 months).

Time for washing up. You probably don't want to here about this, so lets jump ahead 30 days. 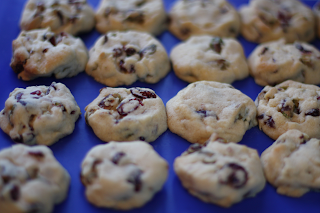 You need to take the dough out of the deep freeze some time before you come to use it. I moved it to the fridge the night before so it was fine.

I set my fan oven to 180°C. I lined my baking sheet with a silicon mat.I could have used parchment, but I've been impressed by these mats.

I used a sharp knife to slice 1cm thick rounds. I inevitably encountered fruit or nuts as I made my cuts. This was no time for panic. Flick 'em out, complete the cut, then squish 'em back in.

For sharper edges, I could have cut them when the dough was harder, however I was quite happy that the biscuits were not uniform. I wanted the chunky, rustic, home made feel and think I achieved this well.

After 12-15 minutes in the oven the biscuits had spread a little on the tray. They had kissed but not joined. The colour didn't change much at all, but they were done.

I left them to cool on the tray before bagging for gifts. The recipe says you'll get 22 biscuits. I had 20, plus a smaller taster for quality control. I like this recipe and can imagine it could be varied easily to get many flavour combinations.
Posted by Gingerbread Boy at 20:16